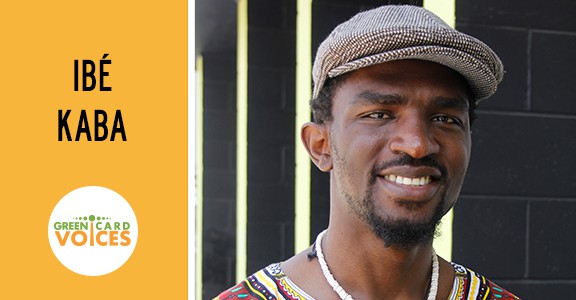 Ibé Kaba grew up with a multitude of relatives in West Africa but only knew a handful of people when he first arrived in the U.S. Family is only one of the things he had to give up when he immigrated.

Although he was born in Guinea, Mr. Kaba spent most of his youth with his aunt’s family in Sierra Leone. A civil war broke out in Sierra Leone, and Ibé moved back to Guinea, becoming a refugee in his home country.

Mr. Kaba did not speak French—the official language of Guinea—and would have had to restart his schooling from the first grade. His uncle, a professor at the University of Illinois, told Ibé to finish his education in the United States instead. Four months later, Mr. Kaba arrived in Evanston, Illinois. He completed his secondary education at Evanston Township High School and earned his BA from St. Cloud State University.

Mr. Kaba is a spoken word poet. Ibé is the recipient of a 2010 Midwestern Voices Award, a 2009 Urban Griots’ Cultural Award, a 2005 Jerome/SASE Verve Grant, and a 2004 Minnesota Academy Award nominee for Best Spoken Word. In addition to his poetry, Ibé works as a systems analyst for the GHR Foundation. He lives in Minneapolis with his wife and three children.

Green Card Voices focuses not only on capturing individual stories, but also on demonstrating the incredible breadth of the immigrant population. Our dynamic, video-based platform is designed to empower a variety of educational institutions, community groups and individuals alike to acquire first-person perspective of immigrants’ lives, increasing the appreciation of the immigrant experience in America. Green Card Voices shares insights into the true immigrant experience, exposing myths and stereotypes that may still linger and stirring deeper conversations that support healing. They give our children and students an opportunity to share, discuss and listen to unfiltered accounts – making learning relevant, engaging and memorable….