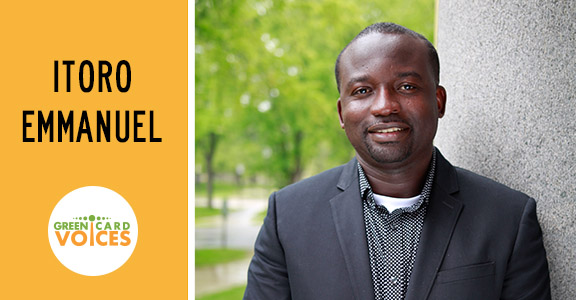 After losing his father to diabetes, Itoro Emmanuel decided to become a nurse. He finds great joy in providing quality care for his patients.

Born in Nigeria, Mr. Emmanuel grew up in the coastal city of Eket with his five siblings. He loved to play basketball and would walk fifteen miles to play at the nearest court. When a friend applied to universities in the United States, Mr. Emmanuel liked the idea enough to apply as well. After being accepted and securing his student visa, he left his home in Nigeria to begin classes at Indiana State University.

Shortly after arriving in the United States, Mr. Emmanuel’s father passed away. Unable to use the telephone and being so far from home, he didn’t find out until several months after the funeral. His father’s health issues led Itoro to change his major to nursing. He moved to St. Cloud, Minnesota where he earned his LPN, RN, and bachelor’s degrees in nursing.

Mr. Emmanuel has worked at the CentraCare Family Health Center and in the Neuroscience and Spine unit at St. Cloud Hospital. He was nominated for and received the DAISY Award for Extraordinary Nurses in 2015. Mr. Emmanuel and his wife live in Sartell, Minnesota with their two daughters.