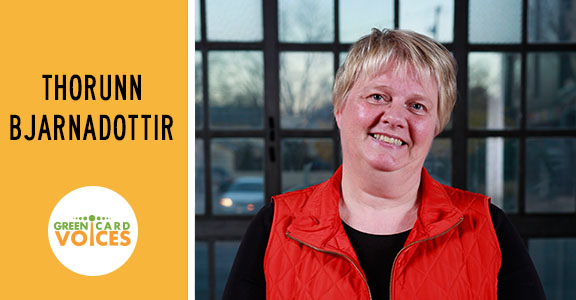 When she came to the United States, Thorunn Bjarnadottir didn’t think she would end up staying. Thirty years later, she has her American citizenship and a family here.

Ms. Bjarnadottir was born and raised in Iceland. She grew up in a large family with three other siblings and enjoyed a carefree, independent, and nature-filled upbringing. When it was time for college, Thorunn wanted to study journalism, but no Icelandic universities offered that degree so she ultimately decided to study at the University of Minnesota.

When Thorunn arrived in the United States, she was met with a number of different customs, like American fashion and the peculiar Minnesotan accent. Most of her time as a student was spent studying and translating her books from English to Icelandic. After graduating in 1989, Ms. Bjarnadottir worked for Utne Reader, the Minnesota House of Representatives, and Minnesota Public Radio before returning to Iceland. An economic recession pushed Thorunn to return to Minnesota to pursue a Master’s in International Education.

Since then, Ms. Bjarnadottir graduated with a Master’s degree, got married to a Ivorian man, and had a son. She currently works as the Director of Intercultural Education at International Student and Scholar Services at the University of Minnesota where she aims to bridge cultural differences.