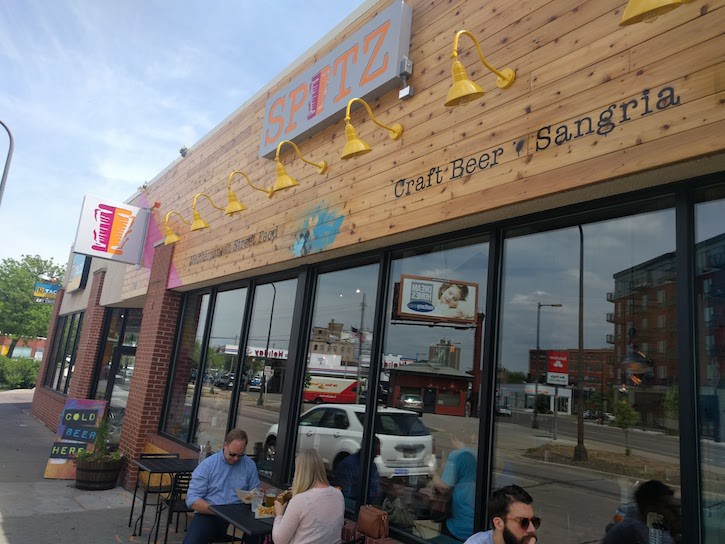 Maybe I over-reacted. I had ordered a $9 döner sandwich at Spitz, a hip new chain restaurant on East Hennepin, expecting a nice juicy sandwich stuffed with real meat – like you get when you order a Döner sandwich in Istanbul or Vienna, or when you order shawarma at one of the better Middle Eastern restaurants in town.

So when the bartender set this wrap down in front of me, stuffed with some kind of processed pressed meat product, like you usually get when you order gyros, I couldn’t resist giving her a piece of my mind. And then I vented to the poor manager on duty, who went into his best customer-is-always-right mode, and offered to give me my money back. (I accepted. I had only tasted a shred of meat from my sandwich, which was enough confirm my suspicions.)

Spitz bills its menu as “Mediterranean street food,” but this wrap reminded me more of Chipotle’s burritos than anything I have had in the Mediterranean or Middle East.

You might think that döner, shawarma and gyros are all different names – Turkish, Arabic and Greek, respectively – for the same thing, or at least variations on the same idea of seasoned, spit-roasted meat. (You can add Mexican tacos al pastor, which are also of Mediterranean origin, to that list. Seasoning and presentation vary a bit across cultures.) And you would be right, sort of.

But in practice, at least in my experience, all the döner I have ever had at Turkish restaurants, and the shawarma I have had at Arabic/ Middle Eastern restaurants have been made from stacked cuts of whole beef or lamb (or sometimes chicken) while the stuff sold as gyros is usually made from some comminuted pressed meat product that was ground into a pink paste. molded into 30-pound cones and shipped frozen from a factory. (The New York Times has a video about the making of gyros that you can watch here.

And then there’s Arby’s, which has started selling gyros, stuffed with its regular processed beef or turkey, topped with lettuce, onions and tomatoes tzatziki sauce and “authentic Greek seasonings.” According to their website, “Nothing says “I am an adventurous eater and interesting person” like eating a gyro at Arby’s.”

If you aren’t picky about your doner kebabs, Spitz does offer a nice selection of craft beers and a “recovery brunch” on weekends.