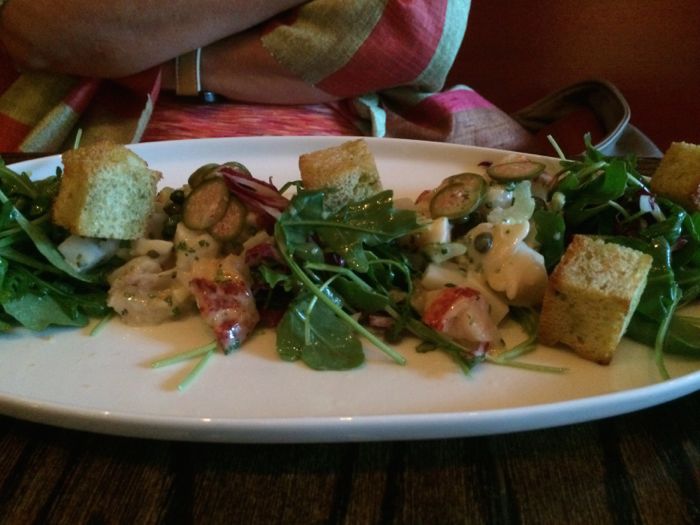 I’ll admit that I haven’t thoroughly checked out the three new Italian restaurants that have gotten a lot of buzz lately – Parella, Monello and Il Foro. At first glance, their menus seem pretty similar. I did sample a few of the small plates at Parella in Calhoun Square, which were just okay.

Terzo is different. Terzo seems to have fallen off of the foodie crowd’s radar, which is a shame because it is a better and more interesting restaurant than when it opened. When I first reviewed Terzo three years ago, I was not impressed. Originally, it was more of a wine bar than a restaurant, intended as a holding pen for diners on the waiting list for a table at the ever-popular Broder’s Pasta Bar across the street. The original menu focused on small plates. Lots of salumi and cheeses,  but with bread available only on request.

There are still a variety of small plates on offer, including bruschetta and assortments of salumi, cheeses and prosciutto, but the menu is now structured to encourage ordering three courses at a fixed price.

What struck me on my most recent visits was, well, everything – the imaginative combinations, the creative use of fresh ingredients, and the sophisticated presentations. My photos don’t really do the cuisine justice, but they’ll give you some idea of what to expect.

The menu changes a bit from month to month, but on my most recent visit, the first course options “antipasti, insalate e zuppe” ranged from a sampler plate of San Daniele prosciutto, buffalo mozzarella and summer vegetables ($10), to a chilled grape and fennel soup, or a zuppa de pesce – prawn, mussels scallops and clams in a lively seafood broth ($12).

I was also impressed by the value. Wednesday through Saturday, you get three courses for $40, which is an excellent value for cuisine of this caliber. On Monday and Tuesday nights, that price drops to $30, which makes it one of the best dining deals in the Twin Cities. (Along with Cafe Lurcat’s $50 per couple date night menu, which includes three courses and a bottle of wine.)

If that’s still too pricy, you can get a hearty porchetta sandwich on a ciabatta bun in several different versions, with chips and slaw for $12-$14. (Also available from their outdoor walk-up window from 11 a.m. to 4 p.m. , for $9-$10 a la carte.) Or stop by during happy hour (4-6 p.m.), when the offerings include a tasty lamb slider or polenta fried mortadella for $4, deviled eggs for $5, and a couple of wines for $5 a glass.