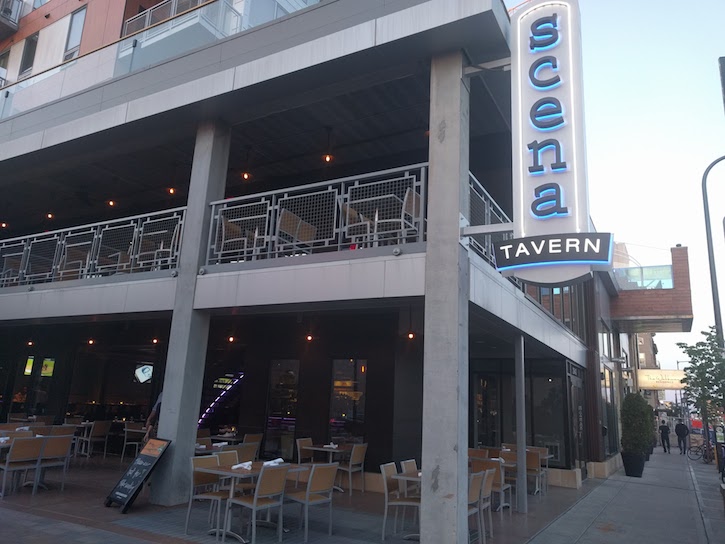 Suddenly, the hip new Scena Tavern in Uptown is my new favorite Happy Hour go-to. Except that Happy Hour is a bit of a misnomer: In the dining room, Happy Hour is from 4 to 7 p.m., and again from 10 p.m. to midnight, but on the ground-level and second-floor patios, the HH menu is served from 4 to close.

When we dine in Uptown, it’s usually out of laziness, rather than by choice. The ethnic restaurants are better elsewhere, and so are most of the fine dining and romantic bistro options. (A couple of exceptions worth mentioning: Rinata, and Lake & Irving.) Typically, we get out of a movie at the Lagoon or Uptown, and it’s after 9 p.m., and we don’t feel like driving elsewhere, or going home and eating leftovers, so we just pick someplace nearby.  Our expectations are pretty low – we just want to get something decent, and not too heavy, without spending a lot.

Which is how we wound up the other night at Scena Tavern. At first glance, it looks like just another variant on the Coup d’Etat/Libertine theme, with lots of patio seating, aimed at the cocktail and craft beer crowd. But the menu sounded interesting – some crudos (Italian sashimi, more or less), some piadinis (flat breads), some interesting-sounding pastas. We weren’t aware of the Happy Hour menu on that first visit, so we selected a few dishes to share from the regular dinner menu: a buttery steelhead crudo with brown butter, dill and egg yolk ($14); a romaine salad with Parmesan, roasted grapes and hints of sage ($9), and a sublime piadina topped with umami-rich Manila clams, parsley and dried chilis ($14).

A server mentioned the Happy Hours as we were leaving, and I stopped by a few days later to check it out. The selections are limited, but the savings are substantial: the yellowfin tuna crudo with orange, rosemary; and the pappardelle with veal tongue bolognese, both regularly $14, and the bucatini with ‘nduja, egg yolk, garlic and herb breadcrumbs (regularly $15) are $8 each, and the piadini (flat breads with toppings) cost $7-$8 instead of $11-$16. The pastas taste like they are homemade, and the sauces are rich and flavorful. These are served in Italian, not American portions, but accompanied by slices of house-made buckwheat foccacia, and a dipping bowl of extra-virgin olive oil seasoned with salt, pepper and fennel pollen, they make a satisfying light supper. There’s also one non-Italian option on the menu: a very juicy double decker burger with American cheese ($7).

What the menu calls piadini (singular should be piadina) is actually more like a Neapolitan pizza. The real piadina, which seems to have been popularized on these shores by Olive Garden and Applebees, is more like a pocketless pita bread that is wrapped around meat or cheese. But all nitpicking aside, the crushed tomato piadini, topped with oregano, mozzarella and fresh arugula ($7) was delightful; much better than the rather salty guanciale piadini  ($8/ reg. $14).

Happy Hour drink prices are similarly reduced: Summit EPA, Boom Island Witness and Fulton Lonely Blond are on tap for $3 a pint, and you can get a glass of the house red, white or sangria for $5. There is no fruit in the sangria, but it was a lively combination of burgundy, gin, brandy, apple cider, lemon, nutmeg and allspice. Why not?

A very erudite friend of mine spotted the Bernard DeVoto martini (Broker’s Gin and Dolin dry vermouth) on the drink list ($11), and interrogated the bartender. It turns out that the preeminent historian of the American West (1897-1955) was also the author of a book called The Hour: A Cocktail Manifesto.  And a target of J. Edgar Hoover and Joe McCarthy. And, according to my friend, the husband of Avis DeVoto, who helped her lifelong friend Julia Child get “Mastering the Art of French Cooking” published.